With just nine days until the 2022 World Outdoor Athletics Championships in Eugene, Oregon, Jeff Benjamin, senior writer for RunBlogRun for the East Coast, and the Running Mayor of Staten Island, is at it once again! The guy can not wait to get to Eugene, Oregon! Jeff is one of my longest enduring writers, having begun writing for us in 1991 with American Athletics. A history teacher, and Civil war reenactor, Jeff loves the sport like few others, and yes, he does know everyone in American Track & Field. This is his column, Countdown to America’s World Championships!

Certainly no stranger to the world of World-Class running and Coaching,  Mark Coogan knows what it’s like to put the eggs in one basket, as he competed in the 1995 World Champs in the 5000 and the 1996 Atlanta Olympics in the Marathon. Now with Elle St. Pierre gunning for the podium in Eugene, Coogan has used all the tools at his disposal to get her ready.

1) You had mentioned that 8 weeks ago Elle and the rest of the team were in a challenging situation fighting Covid – as a coach how do you approach the challenge to keep the Athletes motivated & positive?

“This was a very challenging spring for the team.  A couple of the women had the team’s first injuries in a few years and then Covid hit us hard.  Elle and Heather each only had one tune-up race before nationals so we had to have a lot of discussions about racing the US Champs at less than 100% physically.

We talked about being ready mentally and just doing your best.  I told Elle to just make the team that’s the most important thing from nationals. I am pretty sure Heather would have made the team if she was able to run one tune-up 1500 before nationals but Covid really prevented her from running much in May.

2) Were there any challenges in your running career that you experienced that can help Elle in Eugene?

“Before the 1992 trials, I was running very well.  Then 2 weeks before the trials I tore my hamstring and had to take a week off.  Not great timing and I did run the trials but I lost my edge mentally.  I really remember it well and so as a coach I really try to help my team stay sharp mentally.  If you are not 100% ready physically you can still be on top mentally.  Just having a good attitude goes a long way!”

3) Elle just looks so strong when she races and I’ve mentioned to you she reminds me of the Legendary Craig Virgin – where does she get her motivation from?

“I think she gets a lot of motivation from her Vermont roots.  Growing up on a farm she has an incredible work ethic.  She loves to make Vermont proud! Also, she has some great teammates to train with and NB Boston is her second family.  Elle is not afraid to lead and put the work in during a race.  Hopefully, some more Americans will start to race more like she does.”

4) One would think that balancing a peak performance at the US Nationals & then coming to Peak again 3 weeks later at the Worlds is quite a challenge – how do you prepare for that?

“I’m thinking we hit the US Champs at 85% and hopefully Elle can hit the worlds peaking at 100%. Everything has to go really well at worlds for a medal and it’s not easy,  but if Elle runs well she has a shot. No one but Elle and I thought she could win the world indoor 3k and she was very close coming in second.” 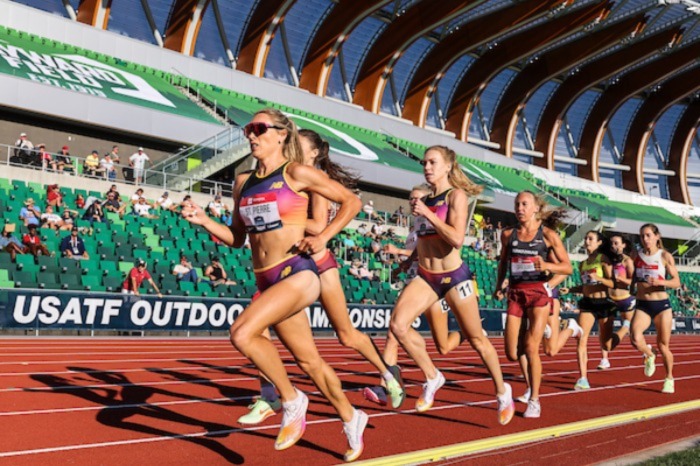 5) Going to  8 weeks ago were there any training plans you’ve had to fine-tune or just throw out leading from then on to the Worlds?

“I was not sure we would make it to nationals at the beginning of May. We never discussed making this a down season but the thoughts crept into my head. There are so many big meets the next few years I don’t think it’s healthy to do them all.”

6) Who will be with you as part of the Team New Balance cheerleading squad in Eugene?

“I’m sure half of Vermont wishes they could go! Elle will have some family there and I will be there.  New Balance has a beautiful house 5 minutes away from the track and we will be helping all NB athletes from all over the world! It will be great!”