This is the first of ten columns by Dave Hunter on the daily happenings at the 2022 World Athletics Outdoor Championships. Dave has done this for RunBlogRun on the 2022 NCAAs and the 2022 USATF Outdoor Championships. I hope that you enjoy Dave’s columns as much as I do! After making a successful career in the world of business, Dave moved to sports journalism and sports announcing. He is following his inner voice, and we enjoy that inner voice.

WC / Day One:  An Historic Beginning

The opening day of the World Championship of Athletics in Eugene. Oregon – once only a fond vision not that long ago – became a reality this morning as a field of nearly 2000 competitors representing 192 nations began a 10-day competition featuring the world’s most accomplished athletes on the track and in the field.  The World Championships of Athletics were first held in Dublin in 1983.  Since that inaugural championship, sixteen subsequent world championship gatherings that followed leading up to this year’s championship were held in various world capitals but never in the United States – until today.  The venues were frequently in large metropolitan areas with stadiums seating upwards of 80,000.  But Eugene, Oregon – spunky, determined, and well-funded despite its population of only 171,00 – found a pathway to its dream, now possesses an unmatched 21st-century state-of-the-art facility (that seats 30,000), and today celebrates its dream come true.  Congratulations.

Against a picture-perfect meteorological backdrop, Day One featured a mixture of preliminary rounds in the field:  men’s high jump; women’s pole vault; men’s long jump, the men’s and women’s shot; and – a treat! – the men’s and women’s hammer throw held inside the new, gleaming Hayward Field.  There was also first-round activity on the track as well, including the 1st and 2nd rounds of the men’s 100m, the men’s steeplechase, and the women’s 1500m.  (Special moments of these events are noted in “Tidbits” below…)

But the anticipation on this opening day surrounded the lone track event final of the day:  the 4×400 meter relay mixed.  This nascent event – where the relay team is comprised of 2 men and 2 women – was first run in a global championship at the ’19 Worlds in Doha, where the USA captured gold with a world-record performance of 3:09.34.  At last summer’s Olympic Games, the victor was Poland (3:09.87), edging both the Dominican Republic (3:10.21) and the USA (3:10.22).  One of the athletes named to the ’22 USA World Championship team and positioned in this event is Allyson Felix, the world’s most decorated track & field athlete and in the twilight of her magnificent and unmatched career.

In the morning’s semi-final round, the USA squad (which did not include Felix) prevailed in the first heat, but not without holding off a hearty challenge by the Netherlands.  Behind after 2 legs, USA veteran Vernon Norwood (44.74) closed the gap and handed off the baton to anchor leg athlete Wadeline Jonathas who started off virtually even with her Netherland opponent.  After some early bumping, Jonathas, a 400m finalist at the ’19 Doha Worlds, kept her composure and blew by the Netherlands anchor on the homestretch to give the Americans the win in a world-leading 3:11.75 and an automatic qualifier to the evening final.  “I run well under pressure,” explained the USA anchor afterward,  in the mixed zone.  “Everything is an opportunity. We hope to do it again. It feels great to be home. We have been here before, but it is a new event for many of us. We just want to do the best we can.”  But perhaps Norwood, who has a box full of global relay medals, explained best how the USA wants to approach tonight’s final::  “We just want to come out, execute a good race, and compete for the gold medal.”

Since the embryonic days of the 4x400m relay mixed, there have been alterations as to relay team lineups and athlete substitution.  Prior to this year, when this event would be held teams could assign male and female athletes to leg assignments as they pleased. No more.  Now all teams must assemble lineups that reflect a “man-woman-man-woman” protocol.  Further, wholesale restructure of preliminary lineups with new, fresh athletes being inserted has been curtailed – is now limited only to a single new athlete being inserted into the final race lineup.

Prior to the final rumors swirled as to what USA might do to strengthen its lineup for the evening final.  Adhering to these new strictures, Team USA made the following permissible changes prior to the final:  they: (i) removed Jonathas (leg #4 athlete in the preliminary round) from the final squad; (ii) moved Kennedy Simon from the 2nd leg she ran in the morning prelim race and inserted her on the anchor leg, and (iii) brought in Allyson Felix (as its sole permissible fresh athlete) to enter the lineup and placed her on the 2nd leg.  Vernon Norwood who ran the 3rd leg in the morning race would run that same leg again in the final.

In the final, USA’s Elija Godwin (44.71) gave the Yankees a modest lead on the opening leg.  The crowd roared as Felix took the baton and widened the USA’s advantage as she raced to grab the pole on the backstretch.  Felix (50.07) faded slightly on the homestretch allowing the Dominican Republic to slide into the lead.  Veteran Norwood (44.48) regained the lead for the US coming onto the homestretch of the 3rd leg and gave Kennedy Simon the stick with a meaningful advantage as she bolted around the first curve. With 200 meters remaining, it appeared that Team USA would be able to deliver a coveted parting gift to the most decorated track and field athlete in history.  But it was not to be.  On the homestretch, Simon (51.10) began to wobble, tying up badly as first the Dominican Republic, the ultimate victor, and then the Netherlands (with Femke Bol running the anchor leg) would pass the American in the final 50 meters to relegate the USA to the bronze.

While gold was the goal, Allyson Felix’s farewell race was nonetheless a special moment.  Her bronze medal – combined with her 11 Olympic medals and her 18 World Championship medals – gives her an amazing hardware collection.  30 is a nice round number and will serve as testimony to her sparkling, unmatched career.

In talking with the media afterwards, Allyson Felix was, as usual, her articulate and humble self.  “It was very special to be able to run in front of a home crowd for my last race. It was so cool. My daughter was in the stands. It was a night I will cherish. I’ve had such good memories,” offered Felix in the mixed zone.  “I know it is time, and these guys will carry it on into the future. I am at peace stepping into this next stage and have tremendous gratitude for this sport.” / Dave Hunter /

mHJ / Prelim:  12 men will jump for the medals on Monday’s final.  Americans Shelby McEwen (T#2 WL) and JuVaughn Harrison advanced with the best clearances of 2.28m. The Co-Olympic gold medalists Mutaz Barshim and Gianmarco Tamberi both advanced, although the Italian needed two 3rd attempt clearances at 2.23m and 2.25m to make the final.

W20KWalk:  Kimberly Garcia Leon won the first gold medal of these Championships, taking the 20-kilo victory.  “At the 15km mark, my coach instructed me to up the pace. I told myself it would be now or never. In the last kilometer, I gave it all to break my national record,” explained the new champion in the mixed zone.   “I have dreamed of this medal since I was little. I want to dedicate it to all Peruvians. They will be very proud. This is the first medal for us (Peru) at the World Championships and I hope it won’t be the last one.”

m3000SC / Prelim: Automatic qualifiers:  Olympic champion Soufiane El Bakkali (looked spectacular in his prelim, finishing first in 8:16.65, best of the day); Leonard Bett; Abraham Kibiwot; Lamech Girma; USA athlete Hillary Bor; 2-time WC gold medalist Conseslus Kipruto;  Haile Amare; USA’s Evan Jager, Olympic silver medalist; India’s Avinash Sable all advanced.  The Olympic champion looks sharp and unbeatable, but Girma will challenge in the final, as will Kipruto.  “ I only have one goal for the final, winning the gold medal.” revealed the Olympic Champion.  “I already won the silver medal in London, the bronze one in Doha; the gold medal is the only one I haven’t won yet.”  After several years of working on returning from injury, Jager had a few thoughts of his own.  “Even though it’s been a while since I’ve been at this level, you know that athlete is in there deep down. You never know what is going to happen. We will gameplan now for the final,” offered the Rio Silver medalist.  “I felt so terrible the last four years, but part of me just felt if I could get healthy again and have consistent training, I could get back to that level.”  Most in attendance will roar loudly for Jager in Monday’s final.

wPV / Prelim:  Olympic bronze medalist Holly Bradshaw retired from the competition before the qualifying activity began after her pole broke during warm-ups and she sustained a nasty fall on her back.  Advances to the final were as expected.  The final of the women’s pole vault will be Sunday. 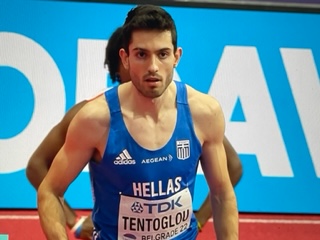 mLJ / Prelim:  In a shocking development, defending world champion Tajay Gayle did not advance to the final of the men’s long jump when the Jamaican failed in all three of his opening jumps.

w1500m / Prelim: First-round performances offered no surprises as the expected top athletes advanced.  The pathway for the women’s metric milers is a difficult one, with the semi-final round in this event held on Day Two with the final on Monday.

mSP / Prelim: To advance to Sunday’s final, competitors had to either: (i) throw 21.20m or better; or (ii) at least be one of the top 12 performers;  For Ryan Crouser – the 2-time Olympic champion, the Olympic record holder; the world record holder indoors and outdoors – it was one and done with an opening put of 22.28m/73’1¼”.  The men’s shot put final will be Sunday evening.  Look for Joe Kovacs and Tom Walsh to battle Crouser in what should be a great competition.