During the press conference of the Diamond League final in Zurich, Tobi Amusan and Jasmine-Camacho-Quinn sat about two meters apart with Swiss fast and rising sprint-hurdler Ditaji Kambundji sandwiched between them. But it felt like a world apart between the two athletes. You don’t have to be a body language expert to know there was palpable discord between them, one that was brought about by their rivalry on the track.

Amusan is the beautiful bride of the women’s 100m Hurdles after her exploits in the event in the last two months. When she was asked by the interviewer about how she felt competing in the World Championships Final after breaking the world record, the ever-smiling Nigerian sheepishly smiled and said “Nerve-racking”.

In a way, Camacho-Quinn felt the question should have been directed towards her. She was being tipped to take down the former record holder Kendra Harrison’s record after she broke the Olympic Record in Tokyo in 2021. A couple of months back she had talked about running 11.9s over the hurdles. But here she was having to play second fiddle to Amusan who has grown in leaps and bounds.

Over the years, athletics have churned out great rivalries. It is often said that one athlete’s dominance isn’t good for sports, especially in individual sports. Sometimes it can be a bore as the athlete is almost always a shoo-in to pick up medals at championships. But rivalry breeds competition. Fight to finish, records being broken, and most importantly a thrill for the fans. 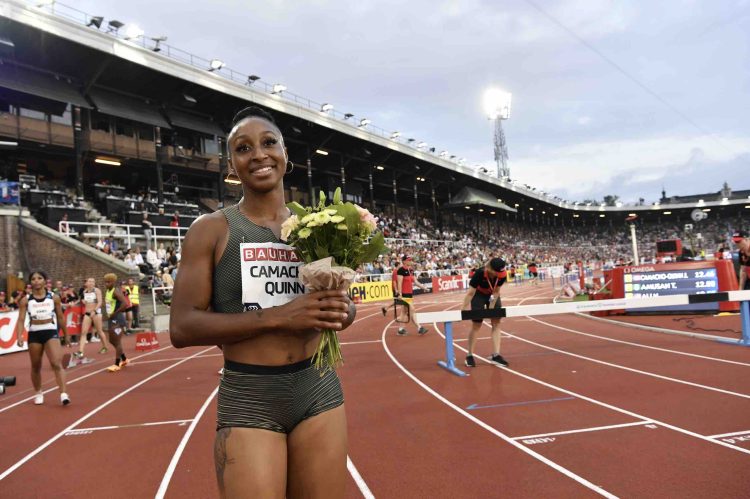 Kenenisa Bekele versus Eliud Kipchoge, Sifan Hassan versus Faith Kipyegon, Tirunesh Dibaba versus Vivian Cheruiyot, or Usain Bolt vs Justin Gatlin, athletics has been littered with many classic rivalries over the years.  And now Amusan versus Camacho-Quinn is the latest of the long list of duels that always captivates audiences anytime they take to the track.

The Nigerian and the Puerto Rican took this duel to a new level this year, one that could potentially lead to many more match-up going into 2023. But you will have to go way back to 2016 when they first locked horns.

Although the 2016 Olympics came to a tad early for Amusan, Camacho-Quinn was tipped to jostle for a medal until she clipped a hurdle in the semis of the Games. Still, she beat Amusan in the heats comfortably.

A year later, Amusan exacted revenge on Camacho-Quinn in the final of the NCAA Championships in Eugene. In what was a stacked race, the Nigerian came out tops, beating defending champion Camacho-Quinn who was 2nd in 12.58s, with Texas’ Rushelle Burton finishing 3rd in 12.65s. Just one-hundredth of a second separated them.

What followed suit was a four-year period of not so much activeness from the Puerto Rican as she was laden with injuries she missed out on the World Championships in 2017 and 2019. All of these mitigated in her facing Amusan just three times between 2017 and 2021. And it was the year Camacho-Quinn became number one in the event.

2022 however has seen them face each other six times. Their first two meetings in the Diamond League in Eugene and Stockholm saw Camacho-Quinn trump the Nigerian. A couple of weeks afterward, Amusan reached her peak as she broke the world record in Oregon while also pipping her rival to Gold in track town. It seemed to shatter the confidence of Camacho-Quinn as many felt she was the best bet to lower the world record after her achievement at the Olympics in Tokyo in 2021.

Camacho-Quinn picked up the pieces, got her confidence back, and won the Diamond League races in Lausanne and Brussels, beating Amusan in the former. She picked up 31 points over the course of the season, while Amusan had 29. That’s how fine the margin was. But they still had to slug it out for who would pick the Diamond Trophy. It made their latest meeting in Zurich all the more interesting.

And when it mattered most again, Amusan ran a blistering 12.29s to take down Gail Devers’ 20-year record and defend her Diamond Trophy while Camacho-Quinn had to settle for fourth. She didn’t seem to run at full throttle as he raced side by side with Amusan.

Both have made history for their countries in their own rights while their paths have crossed. When Jasmine Camacho-Quinn broke an Olympic record and won a gold medal in Tokyo, she celebrated a historic win as an athlete, a Black representative of Puerto Rico, and a member of a family she had just recently met.

Camacho-Quinn made history twice in Tokyo. She beat Kendra Harrison of the United to set a new Olympic record of 12.26s in the semifinal and eventually won Gold in the final. It was Puerto Rico’s first gold in track and its second medal in the sport, after a bronze in the men’s 400 hurdles for Javier Culson in 2012. Although Camacho-Quinn was born in South Carolina, she decided to run for Puerto Rico to honor her heritage because her mother was born in Puerto Rico.

Amusan on her path became the first Nigerian to win a Gold in the history of the world championships when she lowered the world record to 12.12s in the semifinals of the Championships. The 25-year-old then clocked a windy 12.06s in the final.

Like many of the older rivalries in Sports, there is a tendency for each to have their fanbase, some might like their different running style or even their personal. Doesn’t matter really in the grand scheme of things as long as they keep churning good times when it matters most.  How long they will continue to drag each other remains to be seen, but one thing is certain, we would enjoy this duel for years to come.