Can an African Male Sprinter finally get on the podium at the World Championships?

This is Deji Ogeyingbo’s first preview of the 2022 World Athletics Outdoor Championships, to be held in Eugene, Oregon at the brand spanking newly built Hayward Field, July 14-25, 2022.

Can an African male sprinter finally get on the podium at the World Championships?

Since the inception of the World Athletics Championships in 1983 in Helsinki, Finland, the race to be crowned the fastest man in the world has always been judged by who wins the men’s 100m.

It has always been the barometer for success for any sprinter. Win that race and you get the tag of world champion for the next two years. In the seventeen editions of the championships holding the men’s 100m, there have been ten different winners with the United States and Jamaica having the most, while Carl Lewis, Maurice Greene and Usain Bolt won the title three times in their career.

Rather strange is the fact that now African sprinter has made the podium of this event in all of its editions, but all that could potentially change when the world’s best sprinters converge at Hayward field for this year’s edition of the championships.

Ferdinand Omanyala’s rise to the top of global sprinting has been rather fascinating. In just 18 months, the bulky Kenyan has set the cat amongst the pigeons in the men’s 100m and might just be the first African sprinter to buck the trend of not making the podium in the blue riband event.

After a long battle with Athletics Kenya about his eligibility to represent the East African nation, he finally sorted that out. In 2021, Omanyala began to lay a stranglehold of the men’s sprint.

After breaking the National record, he became the first Kenyan to reach the semifinal of the men’s 100m at the Olympics, clocking 10.00s. Omanyala’s times after the Olympics was startling. 9.86 in Austria, and a 9.77s clocking at the Kip Kieno classic in September 2021 moved him into the list of the top 10 fastest men of all time.

More importantly, was how Omanyala started this year’s outdoor season like a house on fire. After a couple of races in Kenya, the former rugby player defeated Africa’s number 1 sprinter, Akani Simbine without having to reach second gear in a time of 9.98s.

About a month later, Omanyala destroyed the U.S.  sprinter, Fred Kerley in the men’s 100m winning a then world lead of 9.85. Despite having the tag of the fastest man in Africa, Omanyala made sure he became the African Champion in the event when he pipped Simbine to the title in Mauritius by three thousand of a second, winning in 9.93s.

Omanyala seemed primed to change the status quo. He’s a fighter, both on and off the track. But most importantly, he has the mindset to challenge the very world’s best sprinters.

Simbine has been called the near man all through his track career as he has narrowly missed out on the podium at the last four major championships. Maybe it’s his time to pounce after so many near misses.

Also, in the span of a year, his title as the fastest man in Africa and the African title over the distance was taken off him by Omanyala, but still, the Commonwealth Games Champion is still the most experienced amongst the lots in Africa to challenge the very best.

Simbine’s season started slowly, but he seems to be peaking at the right time ahead of the worlds. Despite losing his African title to Omanyala, the South African has picked up to pieces as he finished third and first at the Diamond League in Oslo and Stockholm.

Alongside Jamaica’s Yohan Blake, Simbine is the most experienced amongst all the current sprinters that have been entered in the men’s 100m, and he remains to be seen if he can finally end his bad spell at major championships. 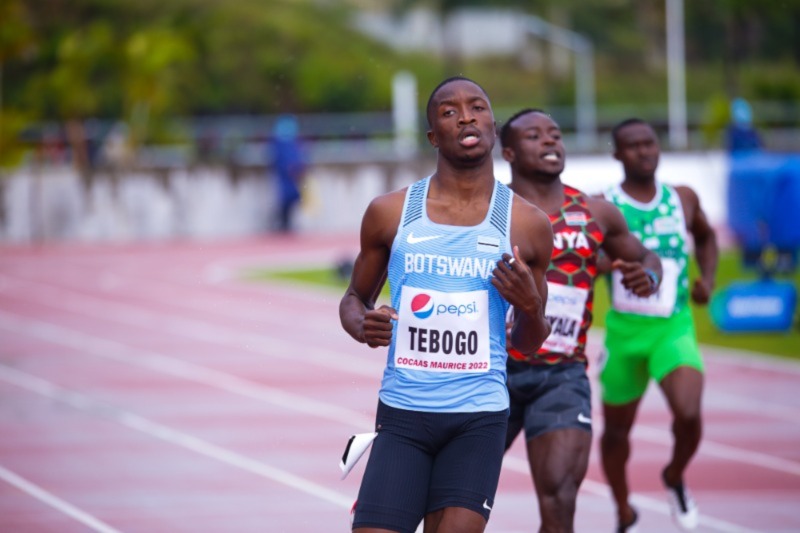 Botswana’s Letsile Tebogo has grown in leaps and bounds in less than a year. The 19-year-Old is the current World Junior Champion in the men’s 100m after he made his international debut for his country at the World U20 Championships in Nairobi last August.

Since then, Tebogo has dipped inside 10s in the 100m, running 9.96s, while also going to claim the 200m title at the African Championships in Mauritius. The youngster has also raced at the Prefontaine Diamond League this year where he finished fifth in 10.12s. So, he has garnered valuable experience in this short timeframe.

With his running style likened to that of Usain Bolt, Tebogo might just spring up a surprise in Eugene.

Another African sprinter that could yet upset the apple carts in Eugene is Liberia’s Joseph Fahnbulleh. The 20-year-old has one of the best top-end speeds on the grid of the men’s 100m.

That much he proved at the NCAA division one final in June when he stormed to victory in a new Personal Best of 10.00s. Also, Fahnbulleh finished fifth over the 200m at the Tokyo Olympics last year.

Much has been said about him working on his start, one that can keep him within touching distance of his competitors in a race before launching his bullet speed at the end.

Ghana’s Benjamin Azamati was one time the world leader in the men’s 100m after he clocked 9.90s in March. It made people talk about how he’s now left the shadows of the Ghana relay team and could stand out individually on his own.

Since then, Azamati has turned Professional chalking up races in Oslo and Paris, finishing first in the latter. He has also run a wind-aided 9.86s this year too.

It might seem too early for Nigeria’s Favour Ashe to get on the podium in Eugene, but for those that have followed this youngster’s rise in the last six months, it’s better suited not to underrate him.

After having a very decent indoor season, where he clocked 6.51s for his personal best, Ashe ran a very fast 9.79s (+3.0) in April. Also, the Nigerian finished second behind Fahnbulleh at the NCAA finals.

Ashe finally got to run a sub-10 at the Nigerian trials last month where he clocked 9.99s.