How can you not forget Sean McGorty’s brilliant and gutty fight to get that third place on the US World Champs team at the 10,000m on May 27, 2022 at Hayward Field? It was a tough race for all over the 25 laps. Jeff Benjamin, senior writer, East Coast  and the Mayor of Running on Staten Island, interviewed Sean McGorty just a few days ago!

Countdown To Worlds With Sean McGorty!

Sean McGorty sure has a high level of versatility! As a high school 4:04 miler, NCAA 5000 Meters Champion, 3:36 1500, 13:06 5000 PR, AND an Olympic Trials finalist in the Steeplechase last year, McGorty has a wide range of abilities, culminating in making this year’s World Championship team in the 10K where he sports a PR time of 27:18!

Speaking with him with less than a week to go, McGorty’s confidence is definitely showing!

1) How’s training been coming along?

Training has been coming along well! Yesterday, we had our last big workout before the race on the 17th. It’s been getting hot up in Park City and the surrounding area where we work out which I think has helped with our preparations. I’ve been happy with how my training has gone at this altitude camp and I’m excited to put it to the test against the best in the world!

2) How do you psychologically prepare to take on this world-class field!

The mental approach has been something I’ve put more focus on this year and I think it played a huge role in me making my first World Championships. So for this race, I’m planning on putting all of the things I’ve learned this year to use. I’d say one of the biggest things though is remembering who I am as a racer and competitor. No matter who I am competing with or what race I am running, I can compete for the same way with the same tenacity. It’s also helpful being able to tow the line with my teammates. I train with some of the best athletes in the world on a daily basis and that certainly gives me the confidence to take on the world. 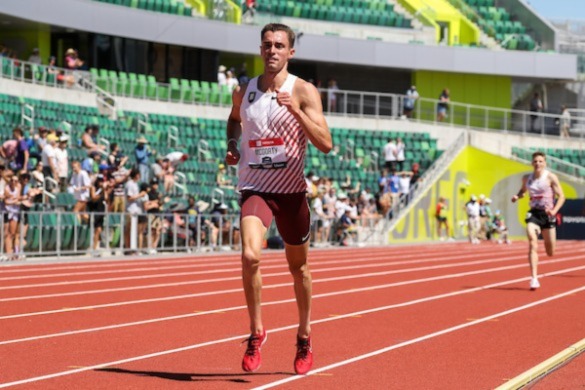 3) How challenging is it to juggle 2 peaks in your training – the USATF meet and then the Worlds 3 weeks later?

One of the best parts of having a coach I trust is I really don’t think about juggling peaks. I trust Jerry completely to have me ready to run my best when it matters. That trust makes it easy to not overthink training. Whatever workouts he is giving us, I know it’s what we should be doing. Mileage is probably one of the biggest things that will fluctuate as we race more into championship season, but I just try to listen to my body and get in quality work without overreaching.

4) Is there any Running Legend out there that you’ve been motivated by?

Maybe the first track and field athlete I remember watching was Jeremy Warnier in the 2004 Olympics. Since then, I’ve been inspired by and motivated by many different athletes at different stages of my running career. Since joining Bowerman, I think it’s been very easy to be motivated by my teammates. I’m surrounded by excellence and individuals who are trying to find their best every day. I don’t know of many situations that could be more motivating than that!

5) You’ve been so successfully versatile in events from the Mile and Steeplechase right up to the 10K – what does the future look like?

I’d like to think the future has a lot of open doors in all of the events you mentioned. I want to be the type of athlete who can have success in a variety of events and it’s certainly something I want to continue to work on moving forward. This summer I’m hoping to be able to race across a multitude of distances which should be a lot of fun!

6) Will there be a McGorty cheerleading group in Eugene and who will it comprise of?

There will be a McGorty support crew in Eugene! My Mom, Dad, two brothers (Ryan and Brandon), Ryan’s girlfriend Julia, as well as some college teammates will be out there. Plus, I’m confident the Bowerman support crew will be in full force!