This is a story close to RunBlogRun’s heart. Stuart Weir wrote this piece on one of the nicest and most humble athletes that we have had the pleasure to meet: Shaunae Miller-Uibo.

When Euan Thomas wanted to do his post-race interview with Shaunae Miller-Uibo, he found the athlete lying on her back on the track, so Euan lay on the track to conduct the interview. “Leaving it all on the track” is a cliché. Sometimes it is just the right words!

Shaunae is an amazing athlete! Twice Olympic champion, world champion once, and runner-up twice – although there is a strong case for reversing that last statistic with regard to 2019. With her long legs, she just glides majestically around the track. 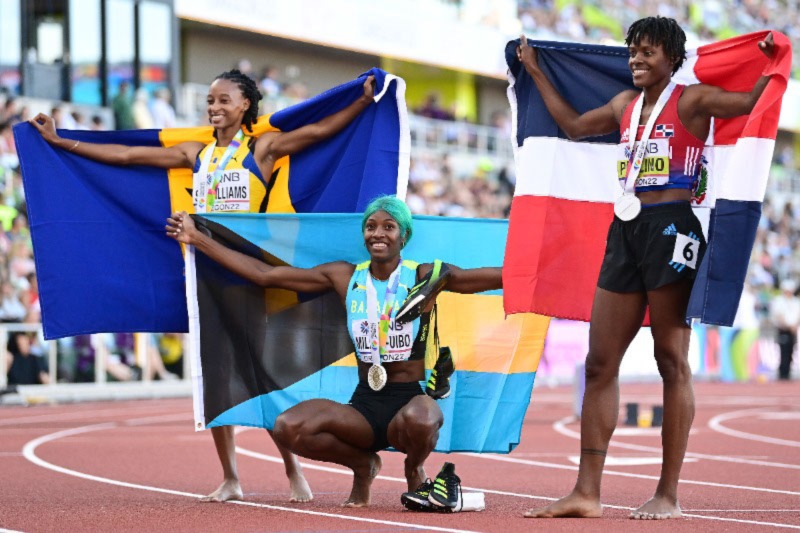 I was struck in an interview with her how the word “fun” kept coming up, so she explained: “Having fun is a big part of it. I think if you don’t have fun with it, it becomes stressful. Running is just something I enjoy doing, and I have enjoyed it since I was six years old. It’s just keeping the fun in it and going out there and doing what I’m supposed to do. It’s a fun thing to do”.

World Championships have not always been kind to her. In 2013 in Moscow, she was fourth in the 200. Then in 2015, in Beijing, she ran 49.67 for second place behind Allyson Felix. She told me: “That was an amazing experience, again my first world outdoor medal. I had a lot of fun with it. The race went extremely well and was a very competitive race. Everyone put everything on the line, and it was a really exciting race”.

In 2017, in London, she was third in the 200 and then fourth in the 400 after seeming to have the race won before a late stumble. Her recollection was: “Things happen in track and field, and I lived and learned through that experience. Things just went a little haywire at the ending, and I missed my steps, and everything went a little off course. But I’m thankful for the moment. I’m a person who believes things happen for a reason – I’m not sure what the reason is, but I’m sure there was an important reason behind it. Everything happens for a reason, and it’s all in God’s timing”.

2019 saw her run 48.37 and finish second behind Salwa Eid Naser, who is currently serving a ban for three mixed tests.

Shaunae is often asked whether she prefers 200 or 400. Her answers are always interesting for never totally clear! She once told me: “I love both events, but I love the 400 a little bit more. Even though some people think I’m better at 200, I would still put the 400 ahead. I feel with the 400, I’m still learning a lot of things, so hopefully, when I put it together, we can see the times drop, but it’s my favorite and the one I think I’m better at. The 400 is a tough event, but that’s what I love about it. It’s not an event that anyone can just pop in and do but that’s what makes me love it a bit more. It’s a tough event, and I love to go at it”. 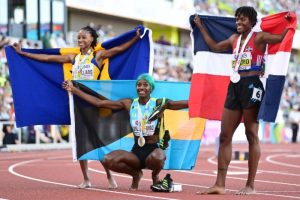 In terms of her approach to the 400, she suggests: “there are a few different types of 400-meter runners – some speed and some endurance. I try to capitalize on my speed, obviously. I feel the quicker I am in the 200, the more chance I have of running a quicker, more relaxed 400”.

Shaunae is married to the decathlete Maicel Uibo, which she sees as an athletic advantage: “With him being involved in the sport, we understand each other to a whole new level. We support each other. We get to travel and watch each other compete. He’s a great motivation in my life as I am in his. I love it”.

I once asked her about her remaining ambitions. Her answer was clear: “I haven’t really accomplished the only goal I have had in the sport, and that is to be the best. I’m still working really hard towards that. I know there are a lot of people to pass on the way up. So I continue to work hard towards that, and hopefully, things will fall into place. That’s the main thing for now. To be the best, I have to begin with a lot of hard work, and dedication, but I also know that we can be anything we want to be in life. This is something I’ve had my eyes on since I was a little girl, and to have that accomplishment would satisfy the younger me, my goals and dreams, so I want to fulfill those purposes”. In Oregon, she certainly seemed to be moving towards that goal.

Her comment on the 2022 win was, “I think I have waited too long for it, but I just give God thanks and praise. It has been a long time coming, so the goal for this season was to make sure we secure the gold medal. I am happy and proud of myself right now. The time did not matter. I was focussing on the gold medal, so ran a tactical race”. Her comments to EBU also referred to “dabbling in multi-events” as an intriguing prospect.

With 3 medals in the women’s 400, Miller-Uibo equals the most medals won in the event, also held by Allyson Felix (USA), Ana Guevara (MEX), and Jearl Miles-Clark (USA), and Lorraine Fenton-Graham (JAM).