The Women’s 1,500 meters: the view from Laura Muir, as she attempts 3 champs in one summer

This is Stuart Weir’s last preview. He has arrived in Eugene, Oregon, and I hope, sleeping. The World Champs are just hours away from Day 1 and Stuart will be in attendance, as usual for Olympics, World Champs, European Champs, Commonwealth Games and Diamond League meets. Our European senior writer is a very busy man this summer.

Olympic silver medalist, Laura Muir, thinks that the women’s 1500m in Eugene “is potentially going to be the strongest it’s ever been.  You could argue that is even stronger than last year in Tokyo with lots of strength in depth. If all the runners on the start list show up and make the final, it has the potential to be the best global final we have ever had, both in strength and depth.  You have the potential for everyone in the final to have run sub-four – which is insane”.

Laura also thinks that she is facing the greatest 1500m runner ever: “Man or woman, I think Faith Kipyegon is the best 1500m runner the world has ever seen.  Her consistency year on year.  I think she’s been in every world final since 2013. And in the last three, she’s won a medal [she was fifth in 2013].  To win two Olympic gold medals back to back is incredibly hard, let alone a five-year gap and having a child as well.  Her times are consistent as well, running very, very fast.  She has not really had a down year except when she had her child.  She is an amazing athlete, and it’s an honor to run alongside her although she is very fast”. 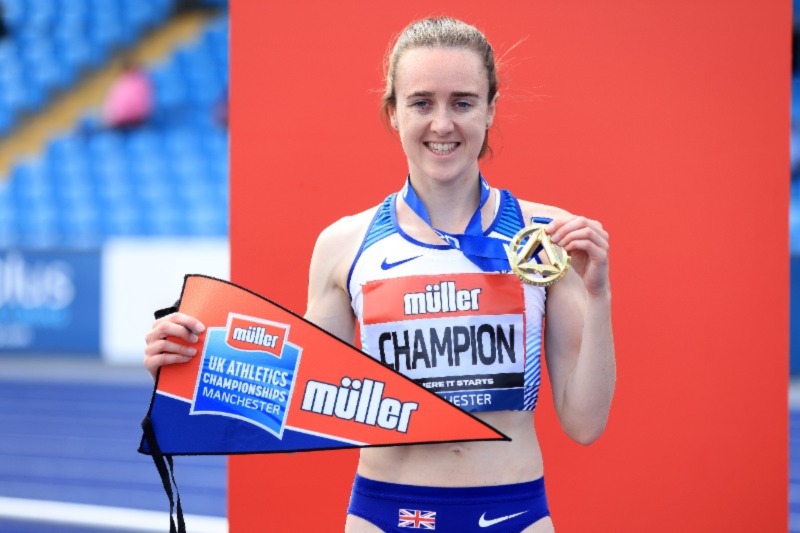 Of the Oregon final, she said: “I would expect it to be fast.  If no one takes it out from the gun, it may not be low-50s fast, but I expect to have to run close to GB record to be in the medals.  I could break the GB record and not get a medal!”

It is a busy season for Laura Muir who set herself the target of not only running in the Worlds, Commonwealth Games, and Europeans this summer but of winning a medal in all three: “The goal for 2022 was to run in all three championships and medal in all of them.  Don’t get me wrong, I’m not saying that I’m not going for the gold – that would be amazing.  While I have a lot of confidence in myself, I am also realistic.  Some of the times the girls are running are faster than I have run, which is not to say that I can’t run fast and get close and match them.  If I win a medal, I will be very, very happy – the closer to the gold, the better!”

Knowing that she will go straight from Oregon to the Commonwealth Games has hardly changed her preparation: “Not much, to be honest. We have been training hard.  I have not really tapered for any races through the season because I will have to hold a peak for so long.  The order of the three champs is right for me.  Worlds are the most important and it is first.  Commonwealth is only every 4 years, and I have not won a medal there, so that is my second priority. Europeans, it would be great to go back and win another medal.

“In terms of competitiveness too, it is in that kind of order. It is incredibly difficult for anyone to do all three, but it works well for me. Because I am a bit older and more experienced, I have got that fitness bagged so I don’t lose fitness as quickly as I would as a younger athlete. I have also the experience of doing multiple events at Championships which isn’t the same but I have experience of having to peak several times. I think it is 5 weeks from first to last day in the three champs. It will be tough, but I hope I am in one of the better spots to try. To medal at one champs is huge, so to medal at three in such a short period would be crazy. I need not to get carried away thinking about that but to focus on one championship at a time”.

Her approach sounds like a cliché but simply reflects her no-nonsense approach: “Take each champs and each round at a time. It is easy to think about what you will do in the final, but you have to get to the final first, and it is incredibly difficult to make finals in tactical races. After each champs to have as quick a debrief as possible and move on to the next

Going into Oregon as an Olympic medalist “gives me confidence that I have been here before and done it, that I have competed on a global level and been on the podium… to know that whatever happens in the future I will always have that Olympic medal. I have always known that I could do it, but it is different when you have gone there and done it. I don’t have to prove it to myself or anyone else. I no longer have the pressure that I have never won a global medal, I can go out there and be more relaxed, and generally, when I am relaxed, I run better”.