Women’s 200m: Shericka Jackson is a favorite for the women’s 200m, but the Olympic champion Elaine Thompson will look to exert revenge while America’s sprinting sensation Abby Steiner could yet cause an upset

This is the second in the series by Deji Ogeyingbo, on previews of the 2022 World Athletics Outdoor Champinships, which happens July 15-24, 2022. This preview is about Deji’s deep thoughts on the women’s 200 meters, which should be stupendous.

Women’s 200m: Shericka Jackson is a favorite for the women’s 200m, but the Olympic champion Elaine Thompson will look to exert revenge while America’s sprinting sensation Abby Steiner could yet cause an upset

You will have to go back to 2012 when an Olympic Champion failed to win the Jamaican trials in both the 100m and 200m. Then Usain Bolt was the undisputed king of the track as he had claimed triple Olympic Gold in Beijing 2008, and broken the world record in the men’s 100m and 200m.

So, it felt bizarre, when in front of his home fans, the then world champion Yohan Blake beat Bolt to both titles in front of the electric Jamaican fans who had become a hero to the sprinting nation.

Ten years later, the same scenario seems to be playing out, and although it still represents a victory for the Caribbean Island as they most certainly will have two medalists in the women’s 200m, the defending Olympic Champion in the event Elaine Thompson-Herah and the 2021 World leader, Shericka Jackson will have scores to settle when they take to the track at the Hayward filed in Eugune over the half lap.

Thompson-Herah, the defending double Olympic Champion, has only lost two races over the 200m this year, with both coming against Jackson. The first came at the Rome Diamond League in June where Jackson laid down the gauntlet with an astute and assured performance over the last 100m, taking the win from Thompson in 21.91s.

The second came at the Jamaican trials, a defeat that would have sent shivers down the spines of Thompson-Herah as she would hope to steal a march on Jackson at the world championships. At the moment though, Jackson seems unstoppable as seen with the way she took the win in 21.55s-the third fastest time of all time (Only behind Thompson- Herah’s 21.53 and Florence Griffith-Joyner’s 21.34.

The question remains if Jackson can replicate her fine performance at the World Championships. The 28-year-Old fluffed her lines when she misjudged her first-round race in the 200m in Tokyo last year as she failed to make it into the semis. Absolution will be at the top of her agenda in Eugene.

But Thompson-Herah will be on a revenge mission. As glittering as her career is she still is yet to win a gold medal at the World championships. At the last World Championships, she didn’t even bring home a medal for Jamaica.

Jackson is undoubtedly the overwhelming favorite for the win. She boasts a better head-to-head compared to Thompson-Herah, with the latter winning edging their duel over the 200m 5-3 after eight meetings.

One sprinter looking to throw the cat amongst the pigeons will be US Champion, Abby Steiner. The 22-year-Old who just turned professional by signing for show giants Puma has been one of the breakout stars in the track world this season.

Before signing on to Puma, Steiner completely dominated the women’s 200m in the NCAA while competing for the University of Kentucky.  Steiner went undefeated in the 200m in the indoor season while she continued to stamp her authority in the outdoor season.

Ramping up wins in every race she entered, Steiner’s biggest achievement over the half-lap came in June. At the NCAA Division 1 final, the American clocked 21.80 to win the 200m, beating Nigeria’s Favour Ofili to the crown.

A few weeks later, Steiner beat a more accomplished field at the US trials to take the women’s title in a new Personal Best of 21.77s.  In an ideal condition, Steiner would not be a shoo-in for the Gold in Eugene, but with such stellar displays over the 200m this season, you just can’t put in beyond her to take on Jackson and Thompson-Herah. 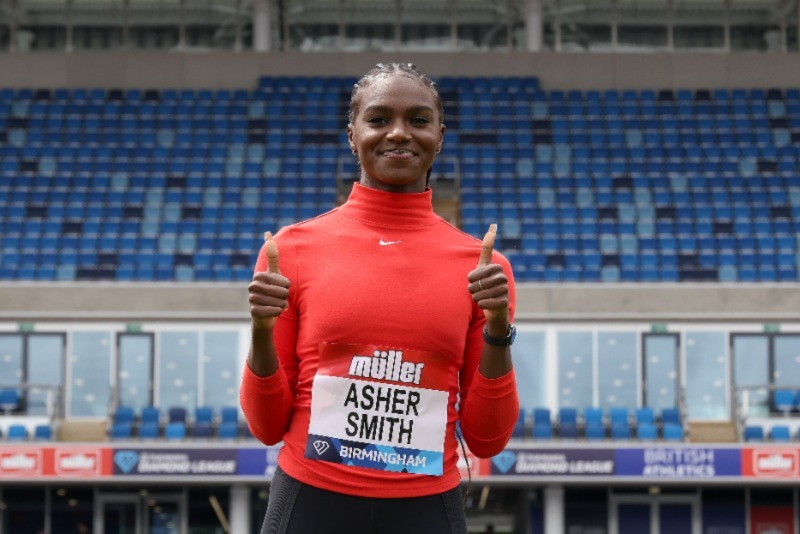 Defending Champion, Dina Asher-Smith seems to be getting back into full swing but has yet to dip inside 22s this year, but her experience in major championships might just put her in contention to get on the podium.

Also, Nigeria’s rising star Favour Ofili, who is the only sprinter to get one over Steiner over the 200m this year can sure cause an upset. The World U20 Bronze medalist has run 21.96s this year, a time that put her at number five on this season’s top list.

USA’s Tamara Clark who finished second to Steiner at the US trials has only raced once outside North America, but she gets the added advantage of having run at Hayward field for almost half of her outdoor races this year. She too will be in the mix.

Overall, Olympic Champion Thompson-Herah will be looking to snag her run of not winning a gold medal at a World Championships. In order to do that, she will have to prove she is still the best female sprinter in Eugene, the same way Bolt did over Blake at the London 2012 Olympics.