Yes, we received this in July, but I was not ready to post the story about Eliud going back to Berlin. I was focused on the World Champs.

One month out, and Eliud Kipchoge is fit. We can not wait to watch the Berlin Marathon. In 2017, I was sitting in Kuai with my Dad and Aunt Marilyn and watching the Berlin Marathon on German TV in the middle of the night. It was a glorious race, but aren’t they always?

Eliud Kipchoge was a World Champion at 18 and an Olympic medalist at 19. For a decade, he ran cross country and track and field. In 2011, Eliud began his two-year transition to the roads, and the fact is, he was concerned, as he did not believe that he was adapting well to the change.

His first marathon was not a win, and it was almost a dozen marathons after that before he had another loss. His masterful exhibition on #Breaking2 may have been one of the best streaming videos on the sport of all times. This writer was sitting in Doha, Qatar, after covering the Diamond League meeting. Staying up all night, I was surprised at how well produced a live event could be. 275,000 twitter impressions showed up on RunBlogRun that night during our minute-by-minute commentary on the live broadcast (this was a live blog, we were not involved with the Nike event).

What I learned that night was that there was an entire new generation of roadies who knew nothing of Eliud’s track prowess and were enthralled by the Kenyan superstar. What also surprised me was that NIKE did not oversell the event and that the story was KIpchoge (of course, the shoes were part of the thing.

In this under-25 crowd, many of them knew that Eliud was in NIKE shoes, but this was about Eliud Kipchoge being this amazing athlete and the absolute complexity of the run and the focus of the late Sandy Bodecker on making the event perfect.

And now, Eliud Kipchoge, in a real race, will see how fast he can go on the streets of Berlin, Germany.

Eliud Kipchoge does it the old-fashioned way. He does the running warrior, zen master climbing Mt.Fuji thing. In 2016 Kipchoge told the assembled masses that great marathoners come through cross country, track and then, and only then, move to the roads.

In 2018, he gave Andy Edwards, our partner at Trackwise/Race News Service this interview: https://www.runblogrun.com/2018/04/eliud-kipchoge-post-race-monday-london-marathon-interview-with-andy-edwards-race-news-service.html

Eliud Kipchoge won the 2021 Tokyo Olympics, and last spring, the Tokyo Marathon in 2:02.40. The Zen Master of the marathon, as Paula Radcliffe first called him, will be burning up the streets of Berlin on 25 September 2022.

Eliud Kipchoge is all set for Berlin return.

The NN Running Team is delighted to announce that Eliud Kipchoge will make his next competitive appearance at the 2022 BMW Berlin Marathon on September 25th.

The race holds many cherished memories for the Kenyan marathon great, and in his last appearance in the German capital four years ago, he claimed the world record of 2:01:39, which still stands today.

Eliud Kipchoge made his debut on the streets of Berlin in 2013, finishing second behind his compatriot Wilson Kipsang, who set a world record that day. Two years later, he returned to claim his maiden success in the Berlin Marathon in 2:04:00 before adding a second crown in 2:03:32 in 2017.

Kipchoge will be chasing a fourth Berlin Marathon title in this year’s event, and should he achieve the feat, he will match the Ethiopian great Haile Gebrselassie as a four-time winner of the event.

Kipchoge said: “Berlin is the fastest course; it’s where a human being can showcase its potential to push the limits.” 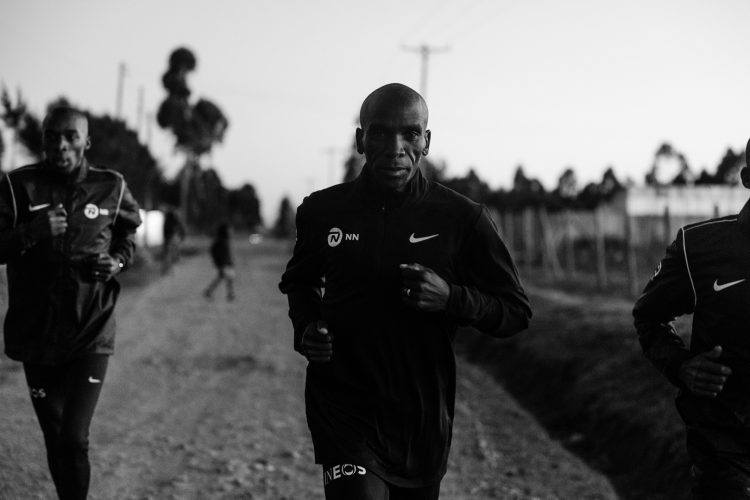 The NN Running Team athlete boasts an unmatched record over the 42.2km distance and has won 14 out of his 16 career marathons. This includes back-to-back Olympic titles at the Rio and Tokyo Games and nine Abbott World Marathon Majors victories.

In his most recent marathon appearance at the Tokyo Marathon in March, the Kenyan triumphed at 2:02:40 – the fourth quickest marathon time in history.