Eilish McColgan takes the W10,000m in the last stretch! photo by Scottish Athletics

Without question, the most popular victory of the second day of track and field at the Commonwealth Games was Eilish McColgan’s win in the 10,000m. As with so much of her career, Eilish was following in her mother’s footsteps, Liz, having won the Commonwealth 10k titles in 1986 and 1990.

Scotland’s fourth gold medal today and what a way to win it! 🥳

Matching her mother Liz’s success in Edinburgh in 1986 by winning the 10,000m❤️ pic.twitter.com/ieTe4I6Dk0

She commented afterward: “It feels surreal.  This is my third Commonwealth Games after finishing sixth three times; I am over the moon to win tonight.  I just can’t put it into words”. Her three sixth places were all at different distances. In 2014 (Glasgow) the steeplechase and 2018 (Gold Coast, Australia) 1500 and 5000 and now a win in the 10,000.  She is also entered in the 5000 this week.

McColgan was never off the pace, and over the last two laps, it came down to a straight fight between McColgan and Irine Chepe Cheptai, with the lead changing hands before McColgan powered home.  The final result was

Coming more analytically, she added: “It has been such an up-and-down year. But I knew the fitness was somewhere in me. Having my family here and the crowd here. It was vibrating through my whole body. I just wanted it so bad. I knew the Kenyans were super strong and would put in bursts. But you can see in that last 100 that I wanted gold. It is an absolute dream. It is so special to have it here in the UK.”

Mother, Liz, was also on hand to make a comment: “For me, as a mother and coach, to see your daughter winning is amazing. She ran the race the way I knew she was capable of. It has been a long time coming, and I know all the hard work she does. It is great that it all came together.” 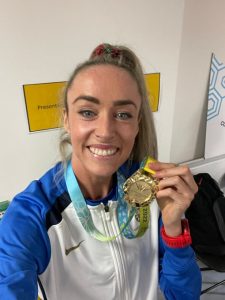 I spoke to her in Oregon after both the 5k and the 10k, where she was 10th and 11th.  She felt that she was in better shape than the results suggested but explained that she was running on with a hamstring problem.  Tonight, she got her reward.