This is a preview of the 2022 Diamond League two-day finals, held in Zurich, Switzerland at the Letzigrund Stadium as part of the Weltklasse Meeting, or as it was called in 1928: “Nurmi’s Meeting.”

After touring 13 cities and competing in various meetings across the world, some of the very best track and field athletes will converge at the Weltklasse Zurich meeting for the final of the Diamond League.

32 different disciplines will be on showcase over the course of the two-day event (Wednesday and Thursday) as champions will be crowned in the Swiss city.

Last year’s champions saw winners from all the continent scoop the Diamond Trophy in one discipline or the other with African Athletes taking up eight (four male and four female) of those spots.

In Zurich, the continent stars would not be left out as they hope to clinch wins in their various disciplines as well as the prize money of 40,000 USD and a spectacular Diamond Trophy created by Beyer, one of the oldest and most respected jewellers in the world.

So, which African stars are in pole position to win their disciplines:

The South African sprinting star has had a topsy-turvy season so far but yet could crown it all with a big win in Zurich if he can overcome the might of some of the biggest sprinters in the sport. Simbine hasn’t thrilled the world with his times, having run a season’s beast of 9.97s in the semifinal of the world championships.

Having won the Diamond League 100m in Stockholm, Simbine finished third in Oslo and eight in Silesia. Defending Diamond League and world champion Fred Kerley won’t be on the lineup as he is still nursing an injury he picked up from Oregon. However, Simbine would still have the might of Yohan Blake, who has run 9.86 this year, world 100m Bronze medallist Trayvon Bromell, and Canada’s Andre De Grasse.

It’s a tough ask for Simbine to usurp them, but after he relinquished his African and Commonwealth Games title to Ferdinand Omanyala this year, the 28-year-Old would be hoping to win his first Diamond League trophy as consolation.

Defending Diamond League Champion Emmanuel Korir has always found a way of showing up when it matters the most. It is why bookies have put him as the firm favourite to win in Zurich.

Korir hasn’t had a spectacular season by his standards, but the Kenyan has a knack for showing up when it matters most. Having struggled in the early part of the season, the Olympic Champion picked up the pieces to win the world title in Oregon.

Still yet to claim a Diamond League victory this year after three attempts in Rabat, Stockholm and Brussels, Korir will have to deliver a gusty performance in Zurich if he hopes to defend his title. World 1500m champion Jake Wightman, who beat in a few days back in Brussels, and Canada’s Marco Arop will be the strongest challengers to his crown.

Korir remains the only runner to go inside 1:43 amongst the field, but you would have to go back to 2018 when he ran such fast times. However, with the world title tag might just push him towards defending his title.

Former world Champion Timothy Cheruiyot has not had the best of the season so far. However, the Kenyan has a chance to make amends in Zurich when he takes on Jakob Ingebrigtsen over the men’s 1500m.

Cheruiyot has only raced in three Diamond meet this year as he scored points in all of them. The first meeting in Doha was his highest placement, finishing second with 3:36.16. His compatriot Abel Kipsang, who will also line up in Zurich, will also pose a big threat to his chances of ending his season with a flourish.

Cheruiyot has won back-to-back Diamond Trophies and would be looking to make it a three-peat.

In the absence of fellow African Lamecha Girma on the line-up of the men’s 3000m steeplechase in Zurich, this race should be a cakewalk for Moroccan world and Olympic Champion Soufiane El Bakkali.

El Bakkali has been unbeaten all through the year, winning all five of his races, including Diamond meets in Doha, Rabat and Lausanne. Being the only athlete to run inside eight minutes this year, it would take a monumental disaster for him not to win his first Diamond League trophy.

This is perhaps the most open of all the races heading into the final in Zurich. Two of the last three champions, Selemon Barega and Berihu Aregawi, will line up against a star cast of distance runners looking to pick up the cash price.

World Champion Ingebrigtsen will only contest the men’s 1500, leaving a quartet of Ethiopians (Barega, Aregawi, Yomif Kejelcha and Haile Bekele) and a trio of Kenyans to battle it out for the trophy.

All seven Diamond races have witnessed different winners, one of which throws the race very open. Burundi’s breakout star Thierry Ndikumwenayo who won in Monaco, could throw the cats amongst the pigeons in the Swiss capital too.

Fabrice Zango has been the pride of the African Triple jump in the last few years. Although he faces the daunting task to usurp Pedro Pichardo, the world champion from Portugal, the Burkina Faso jumper will have other younger contenders from Cuba lurking to deny him his first chance at the Diamond Trophy.

Having won Silver in Oregon, Zango will be motivated by the 21 points he accumulated during the course of the season as he hopes to become the first African to win the title.

Despite her achievement and newfound status, Amusan’s quest to defend the title she won last year will not come easy. Her long-time rival, Jasmine Camacho-Quinn, has won all four of the Diamond League races she competed in this season, with Amusan and former world record holder Kendra Harrison picking up wins in Doha and Paris, respectively.

Camacho-Quinn seems to have shaken off the disaster of not winning her first world title in Oregon as she beat both Amusan and Harrison in Lausanne. Yet, Amusan boasts the world record and will be looking to assert her newfound status in Zurich.

Another breakout star in the Diamond League circuit is Mary Moora. The Kenyan is ranked number 3 in the world over the 800m and picked up the Bronze at the world championships in Oregon.

Moora has ruffled shoulders with some of the world’s best and will be hoping to add the Diamond Trophy to the Commonwealth Games title she won in Birmingham.

With World Champion Athing Mu not in the field, Moora’s major contender will come in the form of Great Britain’s Keely Hodgkinson, one whom she beat by 0.33s at the Commonwealth Games. Moora won the Diamond League meet in Stockholm.

The question has always been who can stop Faith Kipyegon? The world and Olympic champion was in a league of her own as she took her prowess a notch higher this season when she clocked a new Personal Best of 3:50.37, coming within a sniff of Genzebe Dibaba’s world record of 3:50.07 in Monaco a couple of weeks ago.

Maybe a sub 3:50 is within grasp in Zurich, we may never know. What is however sure is it would take something special to stop her. Ethiopia’s Gudaf Tsegay pushed her to the limit at the world championships in Oregon, clocking 3:54.21 for her season’s best, but it is still a far cry from what is needed to beat Kipyegon.

Great Britain’s Laura Muir won the trophy in 2018 but has come unstuck in most of her races this season as she boasts only one win from the Birmingham meet. 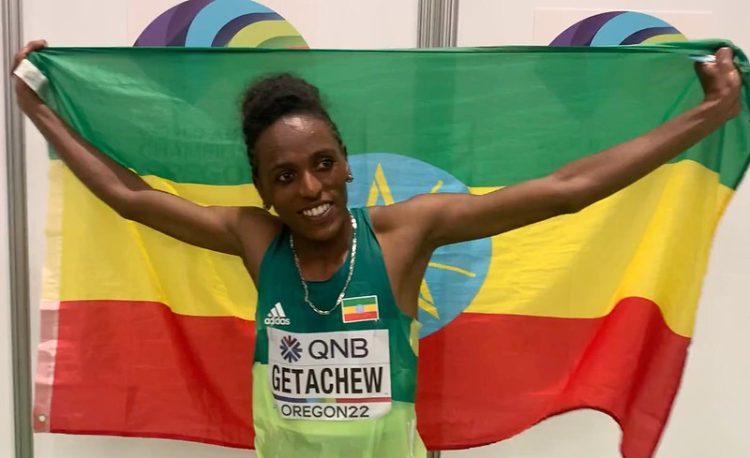 African Champion over the women’s steeplechase Werkuha Getachew had a world attempt fall short in Brussels a couple of days back, and she would look to re-ignite it in Zurich. Would it be enough to get the win?

In the Belgium capital, Getachew lost out with less than half of the race to go, and with lessons learned, you won’t put in past her to upgrade her silver from the world championships in Oregon to first place in Zurich.

Bahrain’s Winfred Yavi has been in superb form this season as she won in Paris and finished second in Eugene will be one of the biggest threats to Getachew, as is 18-year Old Kenyan sensation Jackeline Chepkoech who beat her in Brussels.

Like she did at the world championships in Oregon, Ethiopia’s Gudaf Tsegay will be gunning for the double in Zurich as the women’s 1500 and 5000m will be held a day apart (Wednesday and Thursday).

Tsegay has dominated the field this year over the distance and she will face familiar foes over the 5000m like she did in Oregon. Dutch Olympic Champion Sifan Hassan has not had a spectacular year, but you can’t rule her out considering her pedigree. Hassan won the Diamond Trophy in 2018.