For track & field to succeed globally, it must transcend merely sports. It needs to be sports and entertainment. One of the true characters of our sport globally is the Italian high jumper, Gianmarco Tamberi. Gianmarco loves to high jump, and he loves his relationship with the audience.

In 2021, Gianmarco shared the gold medal in the high jump at the Tokyo Olympics. That competition and subsequent social media were one of the largest watched, rewatched, and celebrated events in all of Olympic sports. 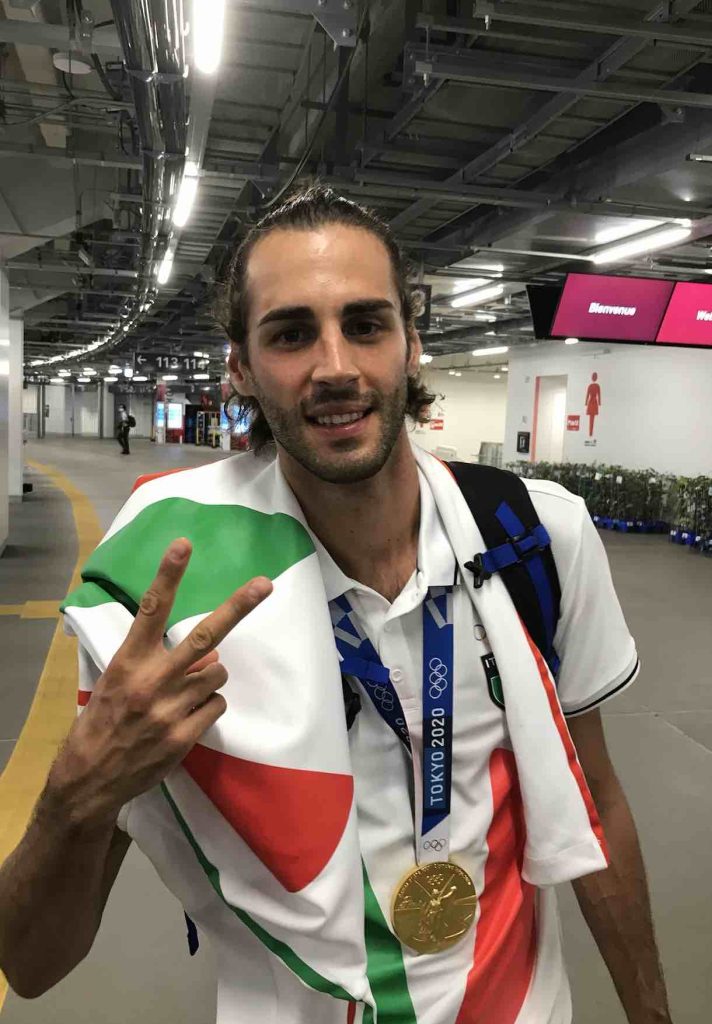 In this feature, Stuart Weir provides us an insider’s view of Gianmarco Tamberi.

In 2022, Tamberi took gold in the bronze at the World Indoor and gold in the European Athletics Championships ( as he had in 2016) in Munich.

His story in 2022 was that a thriller, as Tamberi had some struggles; well, we will let Stuart Weir tell the story!

On the night before the Golden Gala, I was having a coffee with two friends in an outdoor café in Rome. Gianmarco Tamberi spotted me, walked over to the table, and shook my hand.  One of my friends, a student in Italy, could not believe that he had come to our table – such is his status in Italy.

2022 was a solid season, after some injury struggles, with a great ending.  He was second in Birmingham and third in the Golden Gala – effectively a major championship for him.  He jumped 2.33m in the World Championship, but that only got him fourth place.

He won the European Championship in Munich and finished the season with a season’s best of 2.34m to win the Diamond League in Zurich.

He will go down in history as joint Olympic Champion in Tokyo 2021 when he and Mutaz Barshim decided to share the gold medal rather than jumping off for a winner.  He dismisses the public reaction: “I don’t know, and I really don’t care about being more famous.  I won the gold medal, but I didn’t expect all the reactions in Italy and around the world.  I was just focused on myself, my story, and my comeback.  I certainly wasn’t thinking about doing something to be more famous”.

He was pleased with what he achieved in Oregon, explaining: “I am still smiling because I know where I have come from.  I know all the problems I’ve had in the last month.  I wasn’t sure that I could even come here.  I am happy that I found a way to jump high today, even with the pain, and to jump a height of 2.33m which until today was a world leader.  But today, Barshim showed why he is the king, and I’m happy for him to have the gold medal because he has shown the world that he is the best high jumper. I can’t complain because qualification was a real struggle, but today, I was able to find a good result, and I’m happy with that”.

In Munich, on a wet evening, he won the European title with 2.30m. He said: “It was an amazing night.  The atmosphere was just amazing. I had a real vibe inside me because of the crowd.  I loved the way that they were supporting us.  Sadly, we could not jump high tonight because of the rain.  My remaining ambition (having won Olympic and European gold) is the world outdoor title.  That is my goal because it would mean that I have won all the big competitions, which motivates me a lot”.

That the Diamond League final was a street event suited him greatly.  He told me: “I like what they’re doing in cities, including the high jump in the city center, in a market square.  It’s a brilliant event to watch; many people don’t know that. City events are the future of track and field”. In Zurich, he won an epic battle with JuVaughn Harrison only on countback, with both athletes clearing 2.34m before the rain made jumping too dangerous to continue.

He said of Zurich: “Jumping so close to the people is crazy. I adore that. I have been missing this atmosphere for so long. The audience of Zurich is really exceptional. They are so crazy; they give me so much energy. Thank you very much. I can perform better if the audience is so close, definitely. I can feel their emotions. It is like jumping into a team; it is a team effort. I do not feel distracted at all by the audience. I am happy that in the end, I took the win. The crowd knows how much I entertain them. So when I asked them to be silent and to stop clapping, this gave me extra energy at an important moment. I had the exact same situation already at the European Indoor Championships in Glasgow, where I also managed an important jump there. I have been working on how to concentrate and stay focused on myself and my technique”.

Picking up his comment about interacting with the crowd, I asked him to elaborate: “I always try to put all my positive vibes into my jumping.  I didn’t want to be the kind of athlete with what I would call a typical track and field attitude’.  I want to be myself when I’m competing.  Just because I put a lot of work into training does not mean that I have to be like a robot.  I want to be myself, and that is who I am.  I like to make the crowd part of my competition and give them some fun because they pay for the tickets.  I want them to be happy and to go home thinking I enjoyed watching that competition.  I’m just enjoying myself. My reactions are not programmed.  I am having fun when I compete, and I want people to have fun watching us”.

He is surprised how he and Marcel Jacobs – Olympic 100m champion – have become national heroes: “I didn’t really expect it, but it seems so important for Italy.  People stopped us in the street and said, ‘thank you for giving us hope.  I think it was a special and positive moment for people after Covid.  It was a great year for Italian sports, volleyball, football, and athletics”.

Finally, not a lot of people know this, but Gianmarco has a PR for the 60m hurdles of 8.66!