The trajectory growth of New Balance Boston’s Elite team has been directed pretty successfully through the last few years by Olympian Mark Coogan. It should not strike one as unusual. From his own athletic growth three decades ago through the ranks to the starting line of the Olympic Games, Coogan has been able to harness his past experiences and coaching philosophies into a truly successful product.

In 2023 Coogan will be sharing his “secrets” in a new book coming out soon!

Here are a few questions for Coach Coogan as the 2023 season begins!

“NB Boston had another very successful year in 2022.  We won both distance races at US Indoor Championships.  Heather MacLean won the 1,500 meters, and Elle won the 3,000 meters.  Heather and Elle joined their NB Boston teammates Siofra  Cleirgh Buttner and Julie Anne Staehli in Belgrade for the World Indoor Champs.  We have a small team so having four of them at the World Champs was a very good start to the year. Then having Elle win a medal at world indoors was a big deal for the team.

Then, New Balance opened our new indoor track on the NB Campus in Boston, and we immediately set the World Record in the DMR.  We beat both the indoor and outdoor records on April night.  Millie Palidino had a breakout year running 15:02 indoors and 31:19 in her 10k debut, which was the 6th fastest time by an American. Heather, in 1500 meters, won the US Indoor Championships and finished 7th at the World Indoor championships. After recovering from Covid, Heather had an awesome outdoor season.  According to World Athletics, she ran the fastest 1500 by an American and ended up being ranked 9th in the world.  She should be the top-ranked American in the 1,500 this year.  Julie Anne ran in the Commonwealth Games for Canada and won the Canadian Champs in cross country.”

2) When did the rest/downtime begin, and how are the runners progressing to this point?

“Everyone has had different downtimes depending on their seasons, but now everyone is back training well except for Elle, who is 7 months pregnant. We make sure to take a good break after the long season to recover mentally as well as physically.”

3) Ellie Purrier St. Pierre performed well in the first half of 2022 – how did the Covid & subsequent pregnancy affect her? Will we see her compete in 2023?

“As a team, we were hit hard by Covid in April and May.  I think everyone on the team was sick. I thought Elle was going to be in contention for a medal at the World Champs in Eugene.  She was just getting over covid when she ran 3:59 in her first race of the outdoor season.  Then she ran into the US Champs pregnant and the World Champs pregnant, so she could not run up to her potential.  We are all very excited for Elle and the new baby.  Some things are more important than running. Elle is hoping to be back sometime next summer, but the main goal is getting a medal in Paris 2024. The most important thing is that Elle is healthy and happy, not her running.

“We added 2 new women and 2 new guys. They are Kristie Schoffield who grew up in New Hampshire, and Emily MacKay, who grew up in upstate New York.   Kristie won the NCAA Champs in the 800, and Emily was an All-American in the 1500.  They both have set PR since the NCAA Champs.  On the men’s side, we added Christian Noble and Sean Peterson.  Christian is probably the best D2 runner ever, with his many wins. He ran 3:36 and 13:24. Sean is up and coming in running, hopefully, a diamond in the rough.  He’s run 3:39 for the 1500.”

5) Can you tell us a little bit about your upcoming book? 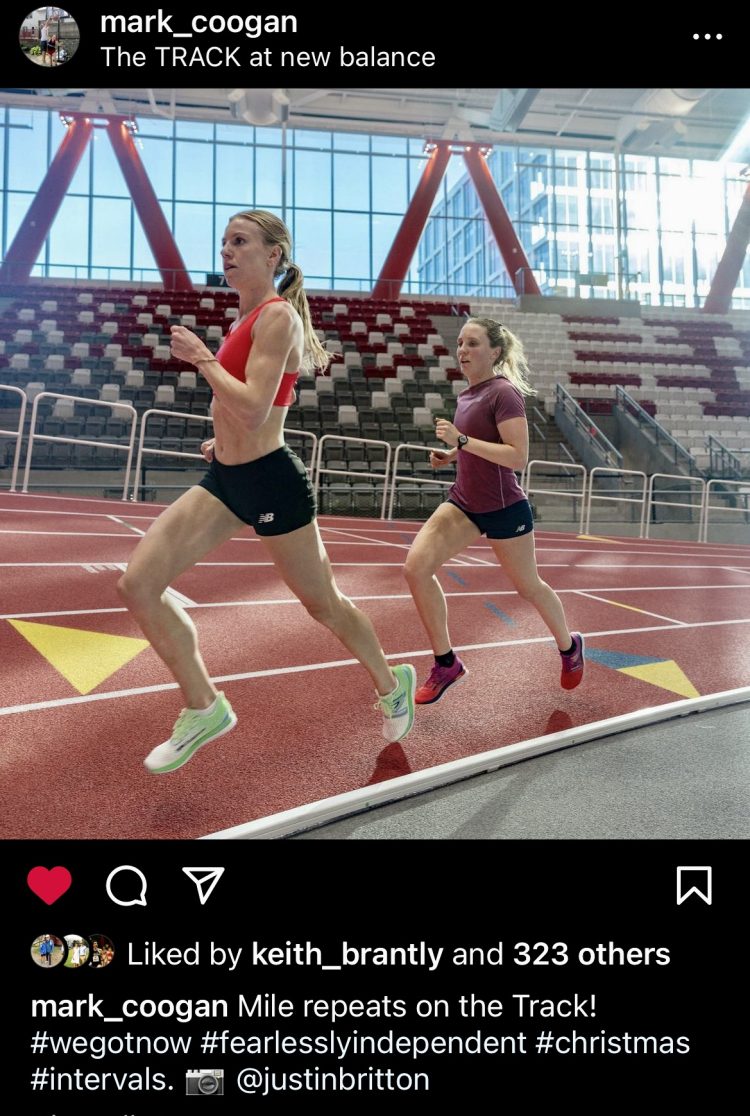 “Scott Douglas and I worked very hard on this book during Covid. Scott is a great writer, and he and I reconnected our friendship from back in the 80s. The book shares my philosophies on running and training.  I have never had the win-at-all-costs attitude that some of the teams we compete against do.  I try to promote running in a healthy way and in an environment where you can reach your goals and still have a life outside of running.

The link describes what I tried to convey in the book.

6) This past World Championships, we saw aggressive front-running tactics – do you believe this is the new norm and if so are you preparing for these tactics in 2023?

“We always prepare for fast races and train for them. Before the Olympic Trials, I knew Elle was going to have to lead, so we ended a handful of practices with an 800 down near 2 flat. That is never easy after already doing some intervals.  That means we will simulate races in practice sometimes and race at off distances so we can handle the fast paces that you see now.”

“We are heading to Flagstaff this week. The team will run 2 or 3 races indoors, take a small break, and go back to Flagstaff and open up our outdoor racing in May.  The US Champs are July 6-9, so it will be a long season with worlds in Budapest and the Diamond League Final in mid-September in Eugene.”