Jeff Benjamin wrote this interview of Neely Spence Gracey, daughter of Steve Spence, a 1991 WC bronze medalist at the marathon and a fine runner and writer. Neely just set a fantastic marathon PB, and has written a new book on women’s running. Special thanks to Mac Fleet for many of the photos.

Throughout running history, Marathon performances many times have fallen into the realm of the unpredictable.

Yet, determined, dedicated, and thorough-planning runners toe the line hoping for the best and not fearing the worst.

1991 World Championship Marathon Bronze Medalist Steve Spence put those qualities to work that hot day in Tokyo when, running against the world’s best, he surprised many by making it into the podium.

Now, more than 3 decades later, Spence’s daughter Neely has “rattled the cage” where, after a hiatus from top-notch competition due to raising a family as well as some injury struggles, the Shippensburg native clocked a 4 minute Marathon PR time of 2:30:29 in finishing 9th at last month’s California International Marathon!

Here are 7 Questions for the newly-accomplished Olympic Trials qualifier.

1) When did you decide to run this marathon and what were your original goals? 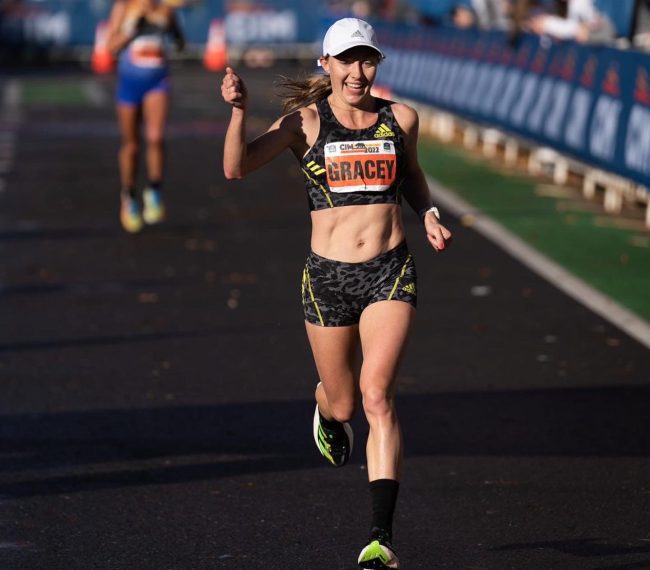 “I have always wanted to run the marathon at CIM and have run the relay twice in years past. Last March, I reached out to the elite coordinator, Danielle, and asked if I could be considered. She mentioned they hadn’t even started the process for filling the 2022 field but that she would be in touch. In May,  I received confirmation of a spot in the elite field and found out that CIM would be at the USA Marathon Championships also! My goal was to run sub 2:37 to secure my fourth Olympic Trials Qualifier.”

2) Were there any phases of the race where you thought it was not your day?

“Dillon – my husband – is also my coach.  Before I headed to the start he said “don’t limit yourself” so when I found myself running with people who were trying to break 2:30 I kept repeating “this is where you’re meant to be”!

Around mile 22, I started to feel some fatigue hit my legs and really had to focus my mental game to keep myself moving forward… I slowed a bit but held strong enough to pass a few people and almost exactly even split the race (1:15:14 & 1:15:15!)”

3) As you went through splits at halfway and in the latter stages were you aware of your pace?

I realized it was distracting me and I was over-analyzing what it was saying vs how I was feeling vs where the mile markers actually were on the course. So I decided I would only use the clock on the course (I was 2 seconds off from my chip to clock time so it was basically the same but I recognize not everyone can do this).

I went through 10k just slightly slower than the 10k I ran all out in May! I was pumped. I kept it rolling and used those clocks to be so proud of myself and stay really positive focusing on how far I have come in the last year since having my second baby. I was a little surprised at halfway to see 1:15 but also felt focused and controlled and knew I could keep a good momentum going.”

4) Your performance reminds me of how Sara Hall developed – do you see any parallels??

“What an honor to be put into a category of one of the USA greats. Thank you! Sara and I have competed since my first pro races in college. I have always enjoyed running with her and I have a ton of respect for her. I would love to see my career have a trajectory like hers.”

“I am still figuring this out. Surpassing my goals at CIM feels so good, I had put all my thought into that. Thinking ahead into 2023, I am looking to chase down a few stroller records since I do a lot of stroller miles it seems fitting and fun for me and the kids in this phase. I am going to work towards a half in the spring and try to get close to 70 which is important for making sub 2:30 pace in the marathon feel good. I’m kicking off my season at the Disney Princess weekend running the 5k-10k-HM enchanted triple!”

6) Did diet and strength training and/or cross-training play a significant role at all?

“I focused a lot on hydration and carbs. I am still breastfeeding Rome, so I really wanted to make sure that I was giving my body the best chance at having the energy and support it needed for both training and nursing. I made sourdough weekly and ate that a lot. I did all my long runs with a hydration vest and got really good at consuming 30oz of fluids in runs over 90min. I did do some strength work, but I was not as consistent as I know I need to be. I did enough to help with injury prevention which was key for me. I worked with the other coach who works for my business, Get Running. Bridget writes our strength training programs and has an app called Vector that she uses. It def helped to keep me on track and I hope to be more committed this spring to getting in longer and more consistent weeks of strength training.”

7) The most unpredictable Olympic Trials race is no doubt the marathon – are you looking at that race yet or is it too far off?

“I am thrilled to have made the step necessary to be able to toe the line in Feb 2024. I’m hopeful that my progress from now until then is great and I can be a top ten contender amidst the very deep field that will be there since American women’s distance running is so strong!”

And now for some final words from her proud Olympic Dad!

“Neely was very happy with her performance and almost 4 min PR,” said Father Steve, A Shippensburg Alum Who Is Also the head XC Coach. “She is enjoying her running and she is a determined young woman.  We’ll see where it goes leading into the trials.  She has quite a ways to go in order to be a top 3 contender.”

For info on Steve Spence’s annual Shippensburg XC Summer Camp please go to shipraiderscamps.com. Both Neely and Dillon plan to serve at camp this year!