Hansle Parchment and the 110 meter hurdles

In the Tokyo 2020 Olympics, the most under-reported story was the amazing performance by Hansle Parchment, a 2012 London bronze medalist, who took gold in the Tokyo games. It was a huge upset for Grant Holloway and challenged Grant to rethink how he prepared for global campaigns. Hansle Parchment and Ronald Levy, both of Jamaica, gave Jamaica a gold medal and bronze medal in the Men’s 110m hurdles. Stuart Weir gives us the back story on Hansle’s success in Tokyo and why he thinks that his best days are still ahead of him.

Hansle Parchment and the 110h

One of the hottest races in Oregon is the men’s high hurdles.  Grant Holloway is the defending Champion. Devon Allen has been showing great form and Hansle Parchment beat Holloway to take the Olympic title.

Hansle Parchment’s Olympic success is quite a story On his way to the Tokyo Athletics Stadium, he found himself on a bus to the swimming pool!  On arrival there a quick-thinking volunteer got him a taxi to the stadium and he won a gold medal.  Recalling Tokyo he told me: “I  went into Tokyo with the intention of winning. That is what I had trained for and what I had prepared for. In my mind, I was thinking of being on top of the podium.  A lot of people had in mind that Grant Holloway would win and he is a brilliant guy. I am impressed by him, how by the first hurdle, he is ahead of everybody. But my focus was on winning and that is what I went out to do. 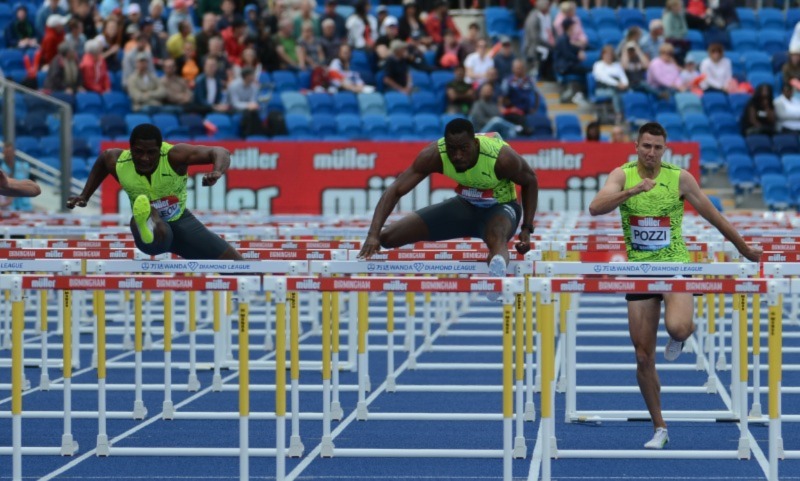 “My coach tells me to put on my mental blinkers, so my focus was to deliver the best race possible.  I knew that to beat Grant and the other guys, I knew that I would need to be closer to them at the first hurdle so I spent a lot of time trying to get it right from the blocks. I had made a few changes before the final.  Mainly foot placements in the blocks. Sometimes your hips come too high and you are not able to push as hard. Sometimes you don’t place your feet firmly enough against the blocks to be able to drive out. I usually have my blocks closer to the line but I moved them back because I am a tall guy. Those were some of the things I was adjusting. I think it all helped to set me up for a better race.

At 32, Hansle is in the form of his life but thinks there might be more to come: “I am not sure yet [if I have peaked]. Based on what I am doing in training I feel that I am close to my best although I am older now. But it looks as if I might surpass that which would be lovely and would mean that I could be more competitive with the younger guys. Compared to 2012 [when he took an Olympic bronze], I think now I am a lot more focused and a lot more disciplined. I am putting things together better now. O think I am better at focusing now and thinking about the things I can control and not worrying about things I cannot control”.

He told me that being Olympic champion meant that he got more calls but that it had not changed him: “I try to keep it normal and remember that I need to keep on working”.

He is ready for Oregon but is looking beyond it: “The worlds is the event that everyone is looking forward to.  That is where I would like to run my best times. After the worlds it is just about having fun, putting together some good performances – not doing too much as 2023 is also an important year”.

“Away from the track, I am interested in so many things including technology and engineering things as they apply to farming. I want to have a farm in the future with more sustainable living. Sustainable living, healthy living, clean environment, recycling – those things are important to me”.