Emmanuel Korir will battle in the 800m in Brussels tomorrow! photo by World Athletics (by Getty Images)

The last regular Diamond League meeting of 2022 will be held on Friday, 2 September 2022. The global audience will be able to watch the meet, nearly live everywhere. In the US, the Peacock TV streaming portion of NBC sports, the part that no one knows about, will show the meet at 11 AM Pacific time.

A plethora of stars will be there, from sprints to distances to field events. Do not miss a minute!

Justin Lagat wrote this piece on the upcoming Diamond League meeting in Brussels, Belgium, on Friday, September 2, 2022, at the Allianz Memorial Van Damme. Peacock TV will feature it live at 11 AM Pacific time.

The Brussels Diamond League meeting that happens tomorrow (2nd September) will be the last non-final ahead of the Zurich Diamond League final that will be on 7th and 8th September. Most athletes will be trying their last luck to make it to the finals, while others already have enough points to be secured the spots in Zurich.

With Ethiopia’s Werkuha Getachew and Mekides Abebe, who finished second and third respectively at the World Championships in Oregon, and Kenya’s Beatrice Chepkoech, who holds the world record, it will be a tough race for Winfred Yavi to maintain her lead at the diamond league point standings.  Yavi already has 15 points so far in the lead. The Bahrain Kenyan-born runner nevertheless will be the woman to watch in the women’s 3000m steeplechase race, having won the Paris Diamond League meeting and finished second at the Eugene diamond league meeting.

The longest of the runs will be a world record attempt for the 1hr run of 21,330m on the same track where Mo Farrah set the record. Kenya’s former world half marathon record holder, Kibiwott Kandie, will be the favorite to go for the fast time.

In the women’s 1500m race, 20-year-old Deribe Welteji of Ethiopia will be the runner to watch as she takes on Laura Muir, who happens to have the fastest seasonal best time of 3:55.28. Welteji is currently in good form, having just won the Silesia Diamond League meeting, beating the world silver medalist Tsegay Gudaf.

Two medalists from the world championships will be in action in the men’s 5000m race. In a quality field, Uganda’s Oscar Chelimo will be seeking to avenge Kenya’s Jacob Krop, who won silver ahead of him in Oregon.

The men’s 800m race, where all the medalists from Oregon will be in action, will arguably be one of the most competitive races of the evening as Emmanuel Korir seeks to repeat his win against Algeria’s Djamel Sedjati and Canada’s Marco Arop.

In the sprints, Brazil’s world reigning champion, Alison Dos Santos, will be there to add another victory to a wonderful year for him so far in the men’s 400m Hurdles event, having already won 5 Diamond League races.

There will also be an exciting women’s 100m race with Jamaica’s Shelly-Ann Fraser-Pryce and Shericka Jackson against USA’s Sha’Carri Richardson. This happened after Richardson defeated Thompson Herah at the Spitzen Leichtathletik meeting in Luzern on Tuesday (30).

At the end of the Brussels Diamond league where another set of athletes will be awarded 8, 7, 6, 5, 4, 3, 2, or 1 point for ranking 1st to 8th, respectively, the top 6 in the field events, top eight for 100m-800m and the top 10 for 1500m and long distances will qualify for the finals in Zurich. In case of a tie, the best legal performance of the qualification phase wins. 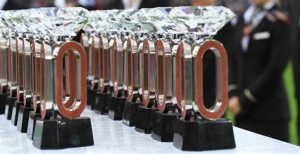 The winner of each of the 32 Diamond League disciplines at the final will become the Diamond League Champion and be awarded a Diamond Trophy, USD 30’000 prize money, and a wild card for the World Athletics Championships in 2023.

Gudaf Tsegay: The only Ethiopian to win two medals at the 2022 World Championships

Gudaf Tsegay: The only Ethiopian to win two medals at the 2022 World Championships