The next chapter for Sydney McLaughlin-Levrone…

Sydney McLaughlin, 400m hurdles, just prior to the final, photo by Kevin Morris

This is a piece on the finest women’s 400m hurdler of all time, Sydney McLaughlin-Levrone. Deji Ogeyingbo asks the good questions about where she goes next? Can she conquer the heights of the 400 meters?

The next chapter for Sydney Mclaughlin-Levrone…

When Sydney Mclaughlin shaved 0.73 seconds off her previous World record mark set at Hayward Field in June by claiming the world title in 50.68s, it made her the first woman to run under 51 seconds in the history of the women’s 400mH. As the time flashed up the screens with many observers in awe of what she had just done, the American squatted, breathing softly, she looked around the stadium as she tried to appreciate what she had just achieved.

For a moment, it all felt surprising. The numbers did not make sense. 13 months before this moment, no woman in history had broken 52 seconds. But here she was, living in the dreams of millions of women who could only imagine what she was feeling. Tired. No smile, but all grimace. And not because she didn’t enjoy the moment; the performance had taken a toll on her. It was almost like she borrowed strength from the next day to put up that performance.

So, when McLaughlin picked up the gong for the best female athlete in 2022, it was a reward for success. This time she smiled as she posed for pictures with HRH Prince Albert of Monaco and other members of the World athletics family.

Athletes like her are rare gems. The 23-year-old American has set world records in every age category since she was 14 and shows no signs of stopping. It’s easier said than done. A lot of precocious youngsters had shown promise in their youth and junior careers and buckled under the pressure when they stepped up to the plate into the senior cadet.

Very few athletes in history come close to how they have dominated their event that they make every other competitor play second fiddle. Mondo Duplantis immediately comes to mind, but it is with the great Usain Bolt that McLaughlin shares a lot of similarities. 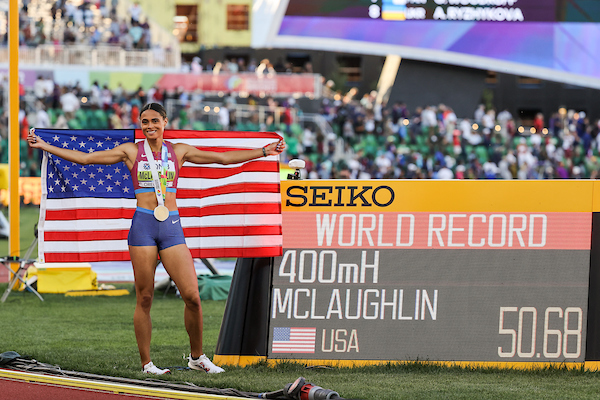 McLaughlin won titles at the Youth and Junior level and in 2021, she went on to win a very first Olympic title. The only title Bolt didn’t win was at the Youth level, but like it’s already established, the Jamaican became a star and popped up into the scene in 2002. The 400m Hurdles might not have the appeal of the 100m but in the grand scheme of things, breaking records in both events is extremely difficult to do.

At the press conference after her win in Eugene, the focus was not on what she had just achieved but on what she might yet achieve. More world records? The 50-second barrier? A switch of events? The world had seen a miracle, and all it wants to know about is her next trick. “The sky’s the limit, for sure,” she says. “I need to ask my coach about our next goal. He calls the shots.” She doesn’t say what she wants for herself.

Now known as McLaughlin-Levrone since marrying their husband Andre Levrone Jr earlier this year, there have been indications about her all-around abilities in other sprints events. In her quest to run faster in her signature event, the Olympic Champion runs the 100m Hurdles and only this year ran a 12.65s.  Four years ago, she set PBs of 50.07 for 400m and 22.39 for 200m and clocked a wind-assisted 11.08 for 100m. During the indoor season that year, she also ran 22.68 for 200m and 50.36 for 400m.

The question on everyone’s lips is how much faster she can run in the 400m flat. The joke was going around at the world championships that her winning time of 50.68s would have put her in the event’s final. Random calculations were made about what McLaughlin could potentially run if the hurdles were taken away from her, but we would never know until she takes to the track and competes.

Marita Koch has held the women’s 400m record for 37 years now. It is one of the longest-standing records in athletics, and it seems rather obvious that it would be the next objective for McLaughlin to tackle.

When Bolt obliterated both the men’s 100m and 200m records in Berlin in 2009, there were whispers that he might just try his hands on the 400m. He dispelled that immediately, opting to focus his attention on his signature events. His dominance was well felt that it had to take a certain Yohan Blake to knock him off his perch in 2011 and pre-Olympics in 2012 to make him get his mojo back. He ran 9.63s to win in London in 2012.

After Blake fell down the wayside, there was the challenge of Justin Gatlin between 2013 and 2016 that Bolt had to contend with. To an extent, the competition was the much-needed push to continue in his quest to dominate his event.

What is the motivation for McLaughlin?  In the last year, Femke Bol and Dalilah Muhammad are the only two athletes to come within touching distance of her prowess. On any given day, she will obliterate them on the track. Still, she still has to keep pushing. The American has won it all at an age when most athletes are looking to get into full stride.

Elite sports can be very cruel. It always has a way of making way for the new guard as the old fades away. There will be younger and better athletes to pop into the scene, and will most likely take down McLaughlin records. But now, let’s savor every time she graces the track because we never know what to expect again.